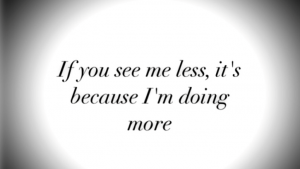 My name is Ellie……..and I’m a blogaholic. It’s been 12 months since my last blog.

Oh, the shame! A writer; a blogger, that hasn’t written a single blog for her wonderful subscribers for 12 months! And still……..you did not abandon me! Thank you!

Let’s get to the reason/s!!

During Summer 2016, I had made the decision to step back and take a sabbatical. I didn’t know when it would begin; I didn’t know the length of time……I just knew it was coming. I had endured 2 tough years previously, where even after a major surgery, I didn’t stop ministering, either here or abroad and quite honestly I was exhausted. That is NOT God’s portion for me…….or for you!
I prayed for direction and His perfect timing, as I knew this time would be to prevent burn out. I also needed to commit myself to my next book, which I am (STILL!) writing, alongside ghost-writing for a great man of God over in New York.

Who knows that God’s plans always have strategic moves and conclude with His works being accomplished in more ways than one?!?? 🙂

Back then, I was reminded of the scripture the Lord gave to me many years ago, Isaiah 61:1…….
“The Spirit of the Sovereign Lord is upon me,
because the Lord has ANOINTED me to proclaim the good news to the poor.
He has sent me to bind up the broken-hearted, to proclaim freedom for the captives
and release from darkness for the prisoners”

I have known for years that my mandate was to speak into the lives of many to encourage the ‘saved’ but more than that, to speak into the lives of the broken, the captives (in their minds; captive to pain, rejection, abandonment), the souls that need to be saved, that need to know of the salvation and love that can only be found in Jesus and through knowing Jesus.
And God has opened very different doors and avenues for me to do just that over the last 12 months.

That’s where I’ve been!! You may have seen me less…..but it’s because I was doing more!! IN A SABBATICAL!!! Make sense?! Nope! I agree………but God in His wisdom 🙂
Let me tell you………REST is the sweetest when it comes with RESTORATION! And my soul has rested and been restored by the incredible and beautiful circumstances and situations God has led me through 🙂
Because I literally am at the end of this God ordained period. And I am restored in the most unexpected of ways.
Hence I am blogging!!!! ha ha ha

He has set me in places I would never have dreamed I would be….even for short spans of time; days or weeks……..and I’m certainly not saying I would want to go back to some of those places……but I have had the opportunity to minister to people I would not ever have met whilst standing on a platform in a church or preaching at a conference.
God had a plan! He is calling out to His lost children. And they are coming home!

Now, it hasn’t been easy. It’s never easy when we are ministering to the lost and most times, utterly broken.
But what better woman to use than the one who went from ‘broken’ to ‘blooming’? YES! ME!!

When the Lord has spent years, pouring and pouring His AGAPE LOVE into you, all you can do is heal and then pour that LOVE into others. You see, His LOVE is never-ending and limitless! Hence, my cup truly does runneth over (!) with His unending, pure and unconditional LOVE 🙂

And I DARED TO BELIEVE that I truly did have the LOVE and POWER of the Almighty inside of me and enable me to step out and reach broken souls in unexpected venues.

(It was the strangest of sabbaticals……but read on)

WOW!! When you see beneath the brokenness of any person, you see POTENTIAL! You see ALL that person can be, can do, can give. It’s an honour to be used by God to reach one of His children.

In the couple of months previous to August of last year (and my planned sabbatical!), I’d had a deep sense of conviction regarding ‘moving on’. Drawing a line. Letting go. I remember praying to God and journalling those prayers and downloads I was receiving. I actually said, “But God, what do I need to move on from? I’ve let go of unforgiveness from my past, I’ve moved on from the pain, I’ve drawn a line under mistakes, assumptions, wrong thinking…….so what’s up God??”
After a period of really deep presence seeking with my Lord, He blessed me with such powerful revelation.
He said, “I want you to move into something different. Not just new. It’s not that I want you to release certain people or thoughts, although I have given you Wisdom in this area. It’s that I want you to PRAY and PREPARE for an entirely different path! And what you need to learn in this time is how to LET GO of the security you have in what you already know. Ellie, your security is in Me, not what you know. I’ve listened to ALL of your prayers and now, I’m about to answer and it’s going to be a completely different route to the one you think I, and you, will take”

WOW!!
And it was! And it has been!! And it still is!!!
Seriously, the last 12 months has unfolded a little like the quote from a Charles Dickens novel ‘IT WAS THE BEST OF TIMES, IT WAS THE WORST OF TIMES’
I’ve been battered and bruised spiritually and physically; the enemy came in like a flood (cause he hates knowing the souls I reached are now spending eternity in Heaven and not with him, in his crib…….Hell!!) but God raised up a standard and His Word and His work which I was called to do, was fulfilled! Amen!

And the wages I have received are exponential! I have a bonus payment too!
I went to the Bank of Heaven today and received a huge return on my ashes; my sacrifice. Soooooo much beauty! For my soul, my spirit, my relationships, my calling………..beauty for ashes………..

Isaiah 61:3
‘To bestow on them a crown of beauty instead of ashes,
the oil of joy instead of mourning
and a garment of praise instead of a spirit of despair’

I am blessed to be a blessing. The Lord is so good!

I would not change ANY of my afflictions because ultimately, I was obedient and souls have been saved.

The locusts had to repay 😉

I am praying for you and I hope you were encouraged by this blog! I pray you hear His still small voice and that He leads you also to the different, the mind-blowing, the new. I pray you are BLESSED TO BE A BLESSING 🙂

***If you want to buy my book Broken to Blooming it’s available in all good bookstores and online too.
Signed copies from my website only***